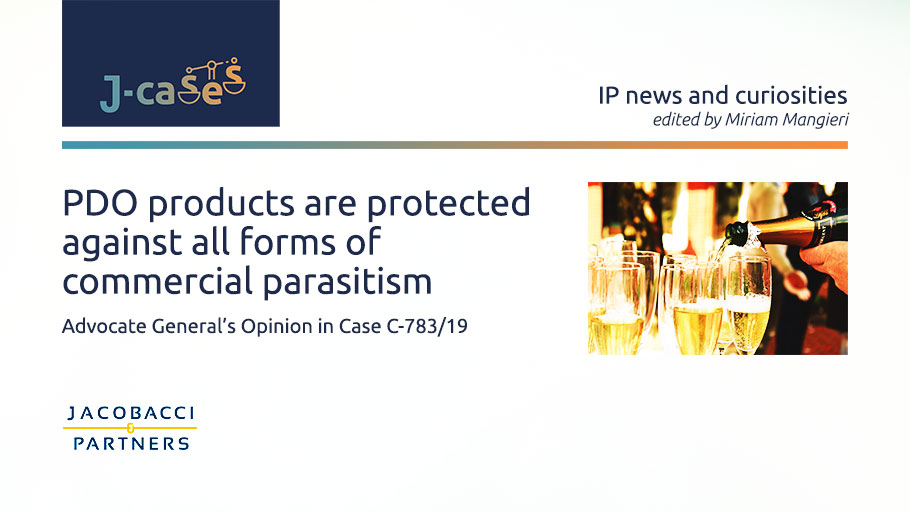 The Comité Interprofessionnel du Vin de Champagne, a body which protects the interests of champagne producers, acted before the Spanish courts in order to contest the use of the word “CHAMPANILLO” used in relation to tapas bars in Spain.

The Audiencia provincial de Barcelona, during the appeal, asked the Court of Justice to interpret EU law on the protection of the PDO products, such as the name “Champagne”, in a situation in which the conflicting name “CHAMPANILLO” is used to designate not goods but services.

In its conclusion, the Advocate General Pitruzzella, designated for the case, argues that EU law protects PDO products against all parasitic commercial practices whether they relate to goods or services.

The Advocate General underlines that the regulation no. 1308/2013 prohibits not only misuse of a PDO,  but any practice, relating to goods or services, which is direct to take undue advantage of the reputation of a PDO through mental association with it. In particular, the regulation prohibits undue evocation of the PDO.

Therefore, what is important in order to establish whether there is an evocation of a PDO is that the consumer is led to make a mental association between the contested element referring to the goods or services in question and the PDO product.

In order to assess the evocation, the national court must consider all the relevant factors of the case and among them the possible identity or comparability between the PDO product and the goods or service of the contested sign.

The Advocate in its conclusions observes that the protection against evocation provided for by the EU regulation no. 1308/2013 does not necessarily require a competitive relationship between the PDO products and the products or services of the contested sign, a likelihood of confusion for the consumer, or the intentionality of the evocation. Therefore, the protection of the PDO does not necessarily presuppose unfair competition.

This legal opinion, expressed with reference to the case Champagne vs. Champanillo is not binding on the Court of Justice. The role of the Advocates General is, indeed, to propose to the Court, in complete independence, a legal solution to the cases for which they are designated. The possible decision of the Court that will embrace the thesis of Advocate Pitruzzella may however constitute an important precedent for the protection of the PDO products also in the case that the forbidden practice is referred to services.