The slogan "it's like milk but for humans" has distinctive character 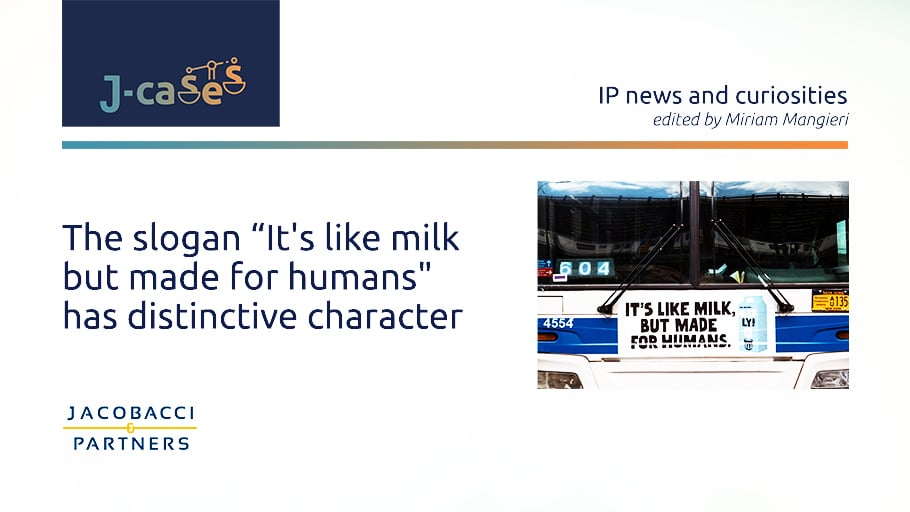 The slogan “It's like milk but for humans" has distinctive character.

On March 2019, the Swedish company Oatly AB, producer of dairy substitutes made of oats, filed before the EUIPO a trademark application for the registration of the word mark “IT’S LIKE MILK BUT MADE FOR HUMANS” in relation to classes 18, 25, 29, 30 and 32.

The EUIPO refused the trademark application considering the same devoid of any distinctive character in relation to goods in classes 29 (milk substitutes), 30 (oat-based products)and 32 (oat-based beverages).

Oatly AB challenged this decision before the Board of Appeal of the EUIPO.

However, even the Board of Appeal found that the trademark applied for was devoid of any distinctive character, since it would have been perceived by the consumers as a laudatory promotional slogan rather than as an indication of the commercial origin of the goods, also due to its length.

The Swedish Company appealed the decision of the Board of Appeal before the EU General Court, alleging the infringement of Article 7 (1) (b) of Regulation no. 2017/1001 and by arguing that there has been an incorrect assessment of the distinctive character of the trademark applied for.

The General Court, looking at the trademark in its entirety, considered that the presence of the coordinating conjunction ‘but’, in the middle of that mark, will be perceive like an opposition between the first part of the mark, “it’s like milk’”, and the second part of the mark, “made for humans”.

The slogan therefore conveys not only the idea that the goods object of protection are akin to milk and intended for human consumption, but also the idea that milk itself is not.

The mark, due to its structure, calls into question the commonly accepted idea that milk is an essential element of the human diet, by determining a cognitive process in the minds of the public and making the sign easy to remember. For this reason, the mark has been considered capable of distinguishing the applicant’s goods from goods which have another commercial origin, as well as providedof distinctive character.

This judgment of EU General Court (case T-253/20) constitutes an important precedent, having admitted the possibility to register a slogan as a trademark if it is possible to recognize a minimum degree of distinctive character in the sign.

Thanks to Miriam Mangieri and Vittorio Pepe.