May two trademarks composed of letters from two different alphabets be confusing similar? 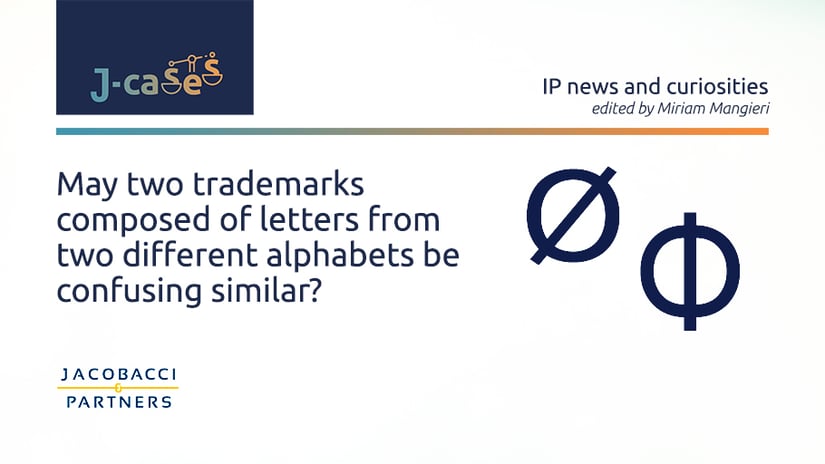 The General Court, with its decision in Case T-399/20, confirmed the existence of a likelihood of confusion between the figurative trademarks Ø and ϕ, that depict letters of two different alphabets. The first one belongs to the alphabet used in Denmark, the second one is the Greek letter ‘ϕ’ or the letter ‘Φ’, of the Cyrillic alphabet used, among others Countries, in Bulgaria.

Below a summary of the case.

On 2017, the American company Cole Haan LLC filed a EUTM application for the figurative mark Ø iin relation to goods in classes 18 (travelling bags) and 25 (clothes).
The Danish company Samsøe & Samsøe Holding A/S, owner of the previous TM ϕ,registered, inter alia, in relation to classes 18 and 25, opposed the EUTM application arguing that there was a likelihood of confusion between the two signs.
EUIPO upheld the opposition and rejected the EUTM application; this decision was also confirmed by the Board of Appeal of the EUIPO. In both decisions the public of reference was identified as the French speaking public that doesn’t have knowledge of Bulgarian, Danish or Greek.
The applicant decided to file a petition before the General Court objecting the conclusions of the Board of Appeal on the likelihood of confusion between the two signs.
In its decision the Court confirmed the rejection of the trademark application arguing that it is sufficient that the risk of confusion exist in part of the public that, in the case at issue, was the French-speaking public.
In particular, the Court affirmed that the letters "Ø", "ф" or "ϕ" are not used in the language of the public of reference and that therefore it is not possible to assume that the French-speaking public will be able to identify such letters as belonging to foreign alphabets.
Thus, it is not possible to presume that the public of reference has knowledge of foreign languages and, in this case, that the French-speaking public will be able to identify the sings as letters of two different alphabets and draw a distinction between them. These observations lead to recognize a high similarity between the two sings on a visual point of view.
As regard the phonetic and conceptual comparison, the Court, in line with the statements of EUIPO, declares that it is not possible.
This decision constitutes an important precedent in the matter of likelihood of confusion between single letters trademarks also if belonging to different alphabets.