The iconic Vespa is a three-dimensional European trade mark and a design protected by copyright. Represented by Jacobacci & Partners, Piaggio won its legal battle against the Chinese scooter manufacturer Znen. The cumulative protection provided by trade mark, registered design and copyright is an important turning point for the manufacturers of products with a very clear aesthetic value.

Vespa is a three-dimensional trade mark

In 2013, represented by Elena Monte of Jacobacci & Partners, Piaggio obtained protection for the shape of the Vespa as a three-dimensional trade mark in Italy and in the European Union, proving that it had acquired distinctiveness.

That year, on the basis of the Italian three-dimensional registration, Piaggio obtained the seizure of some scooter models exhibited at the EICMA trade fair by the Chinese company Znen, called Cityzen, Revival and Ves, the first two of which were protected as registered Community designs.

Following the seizure, Znen brought an action before the Court of Turin, petitioning the Court to declare that the three scooter models were not counterfeits of the Vespa, and the invalidity of the Italian three-dimensional trade mark.
Piaggio, defended by lawyers Fabrizio Jacobacci, Barbara La Tella and Maddalena Deagostino of Studio Legale Jacobacci e Associati, requested the Court not only to reject Znen's claims, but also to confirm the validity of its three-dimensional Italian trade mark and to establish that the shape of the Vespa, as a work of "industrial design", enjoyed protection pursuant to Article 2.10 of the Italian copyright law.
The Court of Turin (decision 1900 of 6.04 2017, confirmed on appeal by decision 677 of 16.04.2019) rejected Znen's claims and confirmed both the validity of the Italian trade mark for the shape of the Vespa and the protection of such shape under Italian copyright law as a work of industrial design, since it is in itself of creative character and artistic value.

The legal battle between Italy and China extends to Europe 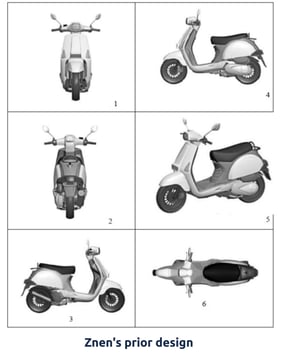 The Chinese company also brought an action for invalidity of the European three-dimensional trade mark before the EUIPO.
Znen claimed that the Community design of its Revival scooter had been registered earlier than the Vespa three-dimensional trade mark, maintaining that Piaggio’s three-dimensional trade mark merely consisted of the shape of the product, a trait not sufficiently distinctive as solely dictated by its technical function and giving substantial value to that product. Furthermore, Znen alleged that Piaggio had acted in bad faith at the time of filing its application.
While further details on the grounds of the judgment may be found at the following link, let us anticipate that Piaggio, represented by Elena Monte, was victorious, as the EUIPO Cancellation Division rejected Znen's petition in its entirety, confirming the cumulability of trade mark and industrial design protections for the same shape – in this case protected also under copyright law.

The Vespa case is particularly interesting in the context of the debate on the protection of shapes by means of different sets of rights, as it undoubtedly clarifies that the typical protection enjoyed by an industrial design – registered or protected by copyright – can be flanked by trade mark protection.
In a still diverse European copyright landscape with regard to protectable industrial designs – with not all creative works protected in Italy but just those having an intrinsic creative character and artistic value – for the manufacturers of products the aesthetic shape of which is increasingly defining their value. This is now evident in many sectors, from furniture and automotive to the food, fashion and medical sectors.
Obtaining protection as a three-dimensional trade mark for a timeless shape such as the Vespa means having a potentially perpetual right, in addition to the protection for up to twenty-five years given by a registered design or by copyright, elapsing after a maximum of seventy years from the author's death.
The target audience is also important. Unlike protection as a model or design, protection as a trade mark extends to all shapes considered similar in the eyes of an "average" consumer, who does not necessarily have to be, as in the case of the model, a person with a thorough knowledge of the sector.
It is therefore evident that the scope of protection afforded by the three-dimensional trade mark is broader when compared with the exclusivity conferred by industrial design.
On the other hand, design protection is preferable in some circumstances because it is not tied to any specific product category.

Piaggio has had the merit of obtaining registration of the three-dimensional trade mark for the shape of the Vespa and the courage to bring its own action against counterfeiters, who are increasingly placing on the market models that are not so similar as to violate a design and are normally distinguished by a different name so as not to violate the word sign, but are sufficiently imitative to recall the Vespa and thus attract consumers who consciously purchase a different product, fascinated by the memory of the iconic scooter.
In a European scenario in which three-dimensional trade marks are rarely granted, Vespa can now count on a trade mark registration that not only passed an assessment of registrability but even withstood an action for its annulment.
The three different protections – registered design, trade mark and copyright – are a very comprehensive arsenal in the fight against counterfeiting.

The Importance of Relying on an Italian Partner for the Local Validation of a European Patent 6 July 2020
Things to consider when validating a european patent in Italy 17 August 2020
Registered Community Design: Why it's important and how to do it 16 December 2020
Anti-counterfeiting: How to Protect Trademarks and Patents in Italy 3 June 2020
IP Portfolio Management: An International Case by Jacobacci & Partners 17 February 2021